SSAG awards the following medal in 2023

The Vega Medal 2023 goes to John Smol Professor in the Department of Biology and the School of Environmental Studies at Queen’s University in Kingston, Ontario, who together with his research group is recognized as one of the foremost experts on the study of long-term global environmental changes to lakes and rivers, and especially as they relate to many of the most pressing environmental issues, such as the long-term effects of lake eutrophication, acidification, contaminant transport, fisheries management, and a large body of work on climate change with a special focus on the Arctic. John Smol is unquestionably one of the most prolific scientists in paleolimnology, and certainly the most prolific regarding northern lake systems. Professor John P. Smol is the founder and head of the Paleoecological Environmental Assessment and Research Laboratory (PEARL), a group of about 40 researchers and students working throughout the world on a variety of limnological and paleoecological problems. John Smol received his B.Sc. in Marine Biology from McGill University in Montreal in 1977, M.Sc. in limnology from Brock University, Ontario in 1979, and received his Ph.D. in 1982 from Queen’s University. Following post-doctoral work with the Geological Survey of Canada, he joined the faculty at Queen’s University in 1984, and was promoted to Full Professor in 1991. During 2001–2022, he has been the Canada Research Chair in Environmental Change. Together with his research group and a wide-ranging number of collaborators, Smol has an extraordinary publication record with more than 670 journal publications and book chapters, more than 20 books, and more than 1100 conference contributions, including 150 invited keynotes and plenary lectures. He founded and was the editor (1987-2007) of the Journal of Paleolimnology, is editor-in-chief since 2004 of Environmental Reviews, and initiated and has been the series editor for the Developments in Paleoenvironmental Research Series, which currently has 15 volumes. John Smol’s contributions to research and teaching are well recognized, with more than 50 awards coming from a diverse range of organizations, including the North American Lake Management Society, Geological Association of Canada, American Society of Limnology and Oceanography, Royal Society (London), and recognition from other universities in Canada as well as Finland, the UK and China. In 2010 he was named by Nature magazine as Canada’s Top Mid-career Scientific Mentor, and because of the importance of his research focused on understanding the effects of global climate and environmental changes, especially across the arctic landscape, Canadian Geographic magazine in 2013 named John Smol as one of nine ‘Canadians changing our world’. In 2018 John Smol was inducted as a Fellow of the Royal Society (UK) and in 2019 received the Polar Medal in Canada for “extraordinary services in the polar regions and Canada’s north”. Currently he is President the of the Academy of Science, Royal Society of Canada.

SSAG awards the following medals in 2020

The Vega Medal to Professor David R. Montgomery, Department of Earth and Space Sciences, University of Washington, Seattle, USA, for his great efforts in physical geography, especially for his efforts in the geomorphological field.

SSAG awards the following medal in 2019

The SSAG’s Medal in Gold to Professor Emily Martin, New York University, USA, for her contributions to anthropology in a long row of influential books and articles.

SSAG awarded the following medals in 2018

The Vega Medal to Professor Gillian Hart, University of California, Berkeley, USA. Professor Emerita Hart has established a worldwide reputation as one of human geography’s leading thinkers: an unrivalled expert on the dialectic of global and local change, on how this dialectic plays out in the rural regions of Southern Africa and Southeast Asia, and on the Gramscian political-economic theory to which she has often turned to understand these issues. Professor Emerita Hart is a world-renowned expert on questions of gender, race and power that she has explored through critical engagements with labor studies, development studies, and agrarian and regional studies.

The Johan August Wahlberg Medal in Gold to Professor Emeritus Arild Holt-Jensen, Department of Geography, University of Bergen, Norway, for his holistic view of geography as science with its applications for urban and regional planning.

SSAG awarded the following medal in 2017

SSAG awarded the following medal in 2016

The SSAG Medal in Gold to Didier Fassin, James D. Wolfensohn Professor of Social Science, Institute for Advanced Study, Princeton, USA. Based on medical anthropology Professor Fassin has extended his research to an overall humanitarian anthropology that has come to focus on vulnerable groups and the social institutions that makes them vulnerable.

SSAG awarded the following medal in 2015 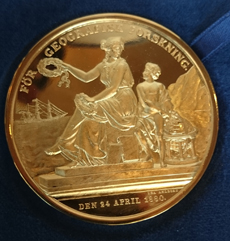 The Vega Medal to Lesley Head, Distinguished Professor of Geography at the Australian Centre for Cultural Environmental Research, University of Wollongong, Wollongong, Australia. Professor Head gets the prize for her contributions to the broad science of cultural geography.

SSAG awarded the following medals in 2014

The Vega Medal to Compton James Tucker, Senior Earth Scientist at NASA Goddard Space Flight Center, Greenbelt, USA and Adjunct Professor at the Department of Geographical Sciences, University of Maryland, College Park, USA. He is awarded the medal for his contributions to the geographical research discipline of remote sensing.

The Johan August Wahlberg Medal in Gold to Guðrún Gísladóttir, Professor of Geography at the School of Engineering and Natural Sciences, University of Iceland, Reykjavik, Iceland. Professor Gísladóttir gets the prize for her contributions to our understanding of land degradation and desertification.

SSAG awarded the following medals in 2013

The Sven Hedin Medal in Gold to Håkan Wahlquist for his contributions to Central and South Asian research history and anthropology and especially for his research on Sven Hedin’s discovery and research expeditions. 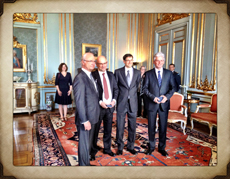 The Society’s patron, His Majesty the King, hands out SSAGs medals at the Stockholm Palace in 2012.

SSAG awarded the following medals in 2012

SSAG awarded the following medals in 2011

The Vega Medal to Terry Callaghan who is professor of Arctic Ecology at the University of Sheffield. He has throughout his career been able to show the need for specialist knowledge of how terrestrial ecosystems respond to changes in ultraviolet radiation and climate change to be able to make predictions of change from a broad geographic perspective. He has led several international research projects, networks and environmental assessments, including Arctic Climate Research Assessment (ACIA). Since 1996, professor Callaghan has been the director of the Abisko Scientific Research Station, and thus been employed by the Royal Swedish Academy of Sciences, until recently when the station was taken over by the Swedish Polar Research Secretariat. Terry Callaghan has over ten years led the network Scandinavian – North European Network of Terrestrial Field Bases (SCANNET), which is a network of Arctic research stations. He recently managed to get EU funding for a major project called the International Network for Terrestrial Research and Monitoring in the Arctic (INTERACT) within which research and monitoring at 34 research stations spread across several geographic regions in the Arctic will be linked together.

Johan August Wahlberg Medal in Gold to Professor Carole Crumley whose research focus is historical ecology and landscape archeology. In a unique way, She combines knowledge of quaternary geology, geography, ecology, anthropology, and archeology. With her research professor Crumley clearly shows how knowledge, within the sciences that SSAG support, can be linked together in research projects whose results are important for the development of a sustainable society. In the past two years, she has been a guest researcher at the Stockholm Resilience Centre.