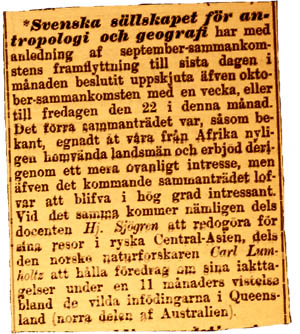 Note on SSAG’s gathering from the end of the 1800s.

In the late 1800s, the white spots on the world map became fewer and smaller. It was above all the inaccessible areas of the continental interiors and the earth’s polar regions that remained unexplored. The European countries competed with each other to first explore these yet unknown parts of our planet.

During this time period SSAG’s precursor Antropologiska sällskapet (English: The Anthropological Society) was formed. The initiative for the formation of the society, which took place 15 March 1873, was Gustaf Retzius, Hjalmar Stolpe, Hans Hildebrand and Oscar Montelius. Beginning in 1875, the society published the Tidskrift för antropologi och kulturhistoria (English: Journal of Anthropology and Cultural History).

Since there was a great interest in geographical explorations during this time period, and because many members also were interested in geography, the society received a proposal for a name change. The name change was approved at the December meeting in 1877, and since then the association carries its present name Svenska Sällskapet för Antropologi och Geografi (SSAG; English: Swedish Society for Anthropology and Geography).

In the course of 1878–1879 SSAG provided a great anthropological exhibition in Arvfurstens palace in Stockholm. The exhibition resulted in a financial loss, which together with reduced government subsidies meant that the society was hit by an economic crisis. This was solved by new membership subscriptions and by opening the society for the public in 1878. These changes generated a more mixed composition of the society and the number of members increased to 686 in 1881. During 1878-1880 SSAG was divided into two sections, an anthropological and a geographical. Since this division did not work particularly well, it was abolished in 1880. With this reorganization the society’s old journal was closed and replaced with Ymer. It was first published in 1881 and was then printed in 1000 copies. Ymer covered both anthropology and geography but soon geography gained a dominant position in the society as well as in its yearbook.

Since the name change in 1877, the anthropological part of SSAG was trailing, and geography came to dominate the society. In the late 1800s, SSAG worked for geography to become a separate school subject. Leading in this work was Ernst Carlson (1854–1909). He wrote the book Carlsons skolgeografi (English: Carlson’s School Geography), which was the leading geography book in secondary school until 1947. The increasing influence of geography within the society and the expansion of the subject led to the the new journal Geographical Annals in 1919. Already from start, this journal had a strict scientific approach, and therefore Ymer also address the public. In 1966, Ymer was converted into an annual book that deals with current research themes in Sweden and has increasingly been used in higher education at universities and university colleges in Sweden since the 2010s.

At the end of the century, Sweden became an important polar exploration country. The task of the polar expeditions was to explore and collect scientific materials, particularly in the Arctic. The expeditions could sometimes also have economic objectives. Often the national prestige was important, and it was essential to assert itself among the other European countries. SSAG members were often initiators of these Swedish polar expeditions. Among the more famous SSAG explorers are Salomon August Andrée, Sven Hedin, and Adolf Erik Nordenskiöld.

Adolf Erik Nordenskiöld was a polar explorer, geologist and geographer. He participated in a variety of polar expeditions, including to Spitsbergen and Greenland. The most famous expedition was an attempt to find the so-called Northeast Passage as the shipping route north of Russia to Asia is called.

The decision on the expedition was made at a Stockholm Palace dinner 26 January 1877, when His Majesty the King and the patron Oscar Dickson decided to support the project. Also Russian Alexander Sibiryakov joined as a financer. Nordenskiöld was at that time chairman of SSAG. His good contacts and scientific reputation turned the expedition into a national matter. It was during this time that Nordenskiöld asked the king and received his consent to become the protector and patron of SSAG.

Vega’s journey from Norway to Japan.

After months of careful preparations Nordenskiöld’s ship Vega could leave Tromso in Northern Norway 21 June 1878. The trip went very well thanks to good planning and Nordenskiölds great experience of Arctic expeditions. A variety of geographical, geological, botanical, zoological, and ethnographic observations were made during the trip. In mid-September, however, the ice conditions got worse, and only two days’ journey from Bering Strait, Vega got stuck in the ice, and the expedition was forced to overwinter in Kolyuchin Bay in northern Russia. Overwintering went well, because large quantities of provisions was brought along for this eventuality. However, it took until 18 July next year before the ice released its grip on Vega and the journey could continue. When Vega arrived in Yokohama 2 September 1879, a telegraph to Sweden could finally announce Vega as the first ship that ever passed the Northeast Passage. Nordenskiöld received an audience with the Japanese Emperor and celebrations were held to honor the Swedes.

Nearly two years after Vega’s departure, the expedition finally arrived to Stockholm 24 April 1880, where the explorers were given a magnificent reception as national heroes. Among thousands of people on the beach was the 15-year-old Sven Hedin who deeply enamored of the event decided to become an explorer himself.

As a result of the expedition, over 3000 pages of scientific reports were published, and the Nordenskiöld travelogue The Voyage of the Vega Round Asia and Europe was translated into many languages. Also, a few months after the Vega’s homecoming, an exhibition about the expedition was arranged at the palace. The material from the expedition was also shown at the General Art and Industrial Exposition of Stockholm in 1897. Five years later it was determined that the memory of the expedition should be honored with a special calendar day, and since 1902 it is celebrated 24 April as the Vega Day. This is SSAG’s highlight of the year and during this day the Vega Medal is handed out to an eminent geographer. Nordenskiöld was, until his death 12 August 1901, the most renowned member of SSAG.

Salomon August Andrée was an engineer and adventurer, who at a young age was inspired by Vega’s journey and later became a member of SSAG. Andree had a bold plan which was to fly with an air balloon over the Arctic.

The purpose of the planned journey was to fly over the ice, photographing, recording, mapping, and documenting the at the time very much unexplored Arctic. The chance to cross over the North Pole made the project even more exciting.

The expedition’s starting point was Danes Island, a small island north of the main island of Svalbard. There were three participants: the expedition leader, engineer and inventor Salomon August Andrée, 43 years old, the engineer Knut Frænkel, 27 years old, and the postgraduate student and physicist Nils Strindberg, 24 years old. Vilhem Swedenborg was reserved and did not join the balloon journey.

The air balloon Eagle (Swedish: Örnen) lifted 11 July 1897. However, the expedition, was hit by early problems. The balloon was weighed down due to glaciation, and already 14 July it landed on the ice less than 500 km from the starting point.

The air balloon The Eagle (Swedish: Örnen) on the ice.

The men had brought folding sleds with them on the balloon, and they continued on foot trying to reach Franz Josef Land, where a food depot had been placed in advance of the expedition. At this location it was also possible to be rescued the following summer. For three months the men toiled with the heavy sleds across the ice. Ocean currents, however, made the pack ice they traveled on to move in the wrong direction.

The tent used during the expeditions journey across the ice. In the foreground is a folding boat that could travel shorter distances over cracks in the ice.

Finally, they arrived at White Island which is located northwest of Svalbard. Here the men died during the winter for unknown reasons. Rescue expeditions were sent out the following year. There were rumors that the expedition had been seen in Greenland, Alaska, and Siberia. However, it took another year before it was realized that the men must have lost their lives.

In 1933, the remains of the men were found, their research materials, equipment, photographic film, and diaries. Successful reading of the diaries and developing of photographs caused a great sensation. The findings from White Island belong to SSAG, and much of this material can today be seen at Grenna Museum and the Polar Centre. The expedition diary entries and photographs was published by SSAG in the book Med Örnen mot polen(English: With the Eagle Towards the Pole). In the yearbook Ymer 1998, which was dedicated to the 100th anniversary of the expedition, one can read more about these polar explorers.

Sven Hedin had at the age of 15 decided to become an explorer, when he saw Nordenskiölds Vega arrive to Stockholm. After finished school, he received an offer to become private teacher of a Swedish engineer at the oil plants in Baku. Hedin immediately accepted this opportunity. This was the beginning of the expeditions that he would carry out in Central Asia during almost 50 years.

His travels took him to the most unexplored parts of Asia’s interior. He made maps and collected scientific material from hitherto unexplored and inaccessible areas. For his efforts, he was knighted by His Majesty the King in 1902. Many of the adventurous travel books that he published became great bestsellers and was read with enthusiasm by many young people. In total, Hedin published some 60 books on a variety of topics. Hedin died in 1952 and rests today at the Adolf Fredrik Cemetery in Stockholm. With Hedin an era of Swedish explorers was ended. The last corners of the earth were by now explored.

The great time of the explorers is now over, but when the 100th anniversary of Vega’s journey was celebrated an initiative to the research project YMER-80 was taken, which resulted in a scientific expedition to the Arctic, where a variety of research data were collected. The work continues, and since its establishment, SSAG has had the same basic objectives that are…

”…that in Sweden promoting the development of anthropology, geography, and related sciences, to serve as a connecting link between the practitioners of these disciplines and the public, to initiate and maintain relations with foreign associations, which have specific rules, and to support research in these knowledge areas.” (§ 1 in the statutes of SSAG, free translation)

Documents about the history of SSAG (in Swedish)